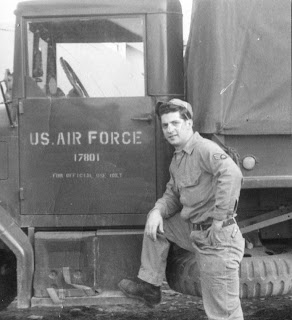 That handsome devil is my Dad, circa 1952. Thankfully he survived his military obligation, notwithstanding North Korea's best efforts.

Of course, the North Koreans never really had a lot of influence over Amarillo, TX, or Anchorage, AK, where he was stationed.

When Dad received his draft notice, bearing greetings from the President of the United States and letting him know that he was going to be a proud member of the US Army, he knew that something had to be done. He was fond of saying many times afterwards, "I decided that Air Force Blue went better with the yellow stripe down my back than Army Green," and chose four years with the USAF over two with the Army. You could do that then; I guess towards the Viet Nam days, you couldn't.

So that's how the old man became an Air Force man. And though it might well have saved him a trip to the DMZ, the Gummint stuck it to him as best it could, baking him for two years in Amarillo, TX, average temperature 183, and then freezing him in Anchorage, AK, average temperature -92. I suppose either place is better than a bamboo jail cell in Pyongyang though.

He spent 3 years, 9 months, 18 days in the Air Force. There was a rule at the time that allowed a serviceman to separate early if his overseas billet expired with less than 90 days left on his hitch. At the time, Alaska was not a state - that wouldn't happen until 1959 - so Anchorage was considered an overseas billet. So Senior Airman (now Sergeant) Cyril R Jacobs got the fuck out of Dodge and came home to the old neighboorhood. He stayed at home - his father had a heart attack and Dad stuck around to help him run the glass store and to help with the bills.

One day as he was in his driveway working on his car (he was a mechanic by trade), he spotted a girl he knew walking up the street towards him.

She was just a girl from the neighboorhood, this one, ten years younger than Dad. Their families had known each other for years. In fact, a-way back when, Dad babysat for this girl - Susan was her name.

Well, Susan came be-bopping up to Dad, a child no more, a curvaceous 19 years old with (apparently) a nice set of legs and a good head on her shoulders. They chatted for a while, catching up, when Dad asked her what she was doing that evening.

They had a wonderful date, one of those low-budget dates that involved a lot of strolling by a river, eating ice cream, and chatting. When she got home, Susan looked at her mom and said "I'm going to marry that man."

11 months later, her prediction came true. And their marriage endured good times and bad, produced three children, and lasted 45 remarkable years.
Posted by crafty at 3:52 AM