To the proud owner of my new navigator

Dear Sir or Madam: Thank you, you motherfucker, for breaking into my car, in front of my house, 40 feet from where my wife was sitting, and stealing my GPS navigator, for which I paid real money.

I hope you come back for more. Ohhhh, you have no idea how much I hope you come back for more. Because I am armed, you sorry son of a bitch, and in Rhode Island the law is on my side. A .22 bullet most likely won't kill you, unless I'm extraordinarily lucky, but three of them in your thigh and knee will give you an ouchy from which you will find it difficult to recover before the authorities come.

Like Terry Benedict said in Ocean's Eleven, run and hide, little man, run and hide. If I find my navigator on Craigslist or eBay I'm going to be so disappointed to give the cops first crack at your cowardly ass.

If I get to meet you in person, you better have backup. Think I'm posturing? Think I'm just talking out of my ass? Try me. Please, I'm begging you, try me.

Until next time, please remember that I'll be watching. Bet your ass on that.
Posted by crafty at 12:06 AM 9 comments:

So much luck - so little money

Yesterday, as was my wont, I was lying on my couch doing nothing when a faint beep inside said couch not only finally solved the "Case of the Missing Mobile" caper, but also told me that I had a text message.

Odd, you say? Wasting the day away in great hours-long chunks, you opine? Does the thought of so much raw sloth just make that type-A go-go-go corporate joyboy asshole of yours pucker up like it's gonna lay a big smooch on Grandma? Deal with it. I like doing nothing. A perfect day for me is one wherein I don't ever have to do anything, except for filling one side of, and emptying the other side of, my food tube.

Left to ruminate on the circle of life as I was, and the happy part that peristalsis plays in it, I reached in and grabbed the phone. It was FDD Spuds, asking me if I'd care to join him in a $2 2-table MTT. Sure, says I, and without the bother of having to close anything I was doing, jumped on and away I went.

My performance at this tournament served only to make at least three people, whom I'd never met, and against whom I had absolutely nothing, curse my name, their horrible luck, and the sacred name of Poker herself (and can we at least agree on this: Poker is every inch a woman?). My luck was just oozing out of every pore. A three-outer that fills his set but makes my straight? Check. The two-outer to fill my lower pair at 4.5/1? Check. TWICE. Miracle runner-runner flush? Check. Fellas, you name it, it happened to me. I was a luck box of astonishing size and scope.

For which my total recompense was $12, if you count my buy-in.

That's right. I traded an all-day tournament's worth of luck to beat 17 people, 13 of whom couldn't play poker to save their lives, for a $14 pot that I had to pay a deuce for. Thus spake Zarathustra: Even my good luck hurts me bad.

FDD Spuds, ever the optimist, suggested that I should look at it like I kicked 17 asses and should take a treasurebath with the money (think Dom DeLuise in History of the World Part I but Holy Buddha! Can I really, rightfully claim a victory when its clear that despite my horrible play I was saved from ignominy my Lady Poker herself?

Yeah, sure, why not. 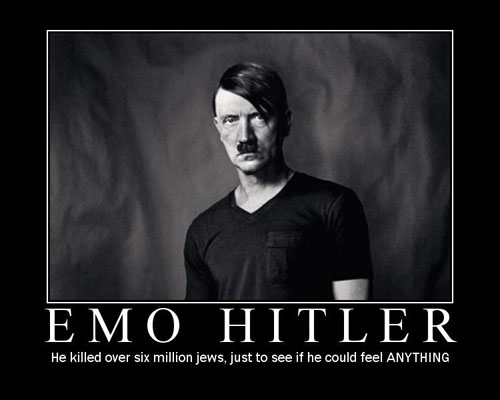 Hitler, you fucking faggot
Not ALL the Germans, mind you.  Just the ones that commented on my site - advertising, as near as I can figure, sexy chat.  Besides the fact that speaking German sounds like gargling lye, I can't think of anything worse.

Anyway, since I'm now a target of The Spamming Hun, I have to turn on comment moderation. Since so few of you comment, I do not see this as an imposition.

Until next time, please remember never to start a war on two fronts if you want to conquer Europe. I'm talking to you, Shickelgruber, you fucking asswipe.
Posted by crafty at 2:08 PM 8 comments:

I hated him. While with the Habs he was a great coach; he was a failure with the B's. He was an enthusiastic proponent of the neutral-zone trap, even implemented a bastardized version of it (more of a left-wing lock, but no matter) in Boston, which was boring as hell AND didn't work.

But damn, man, he was 59, and was an icon in the NHL, and I'm sorry he's gone. Anyone who likes hockey should feel the same sorrow.

Until next time, please remember Pat Burns and his family.
Posted by crafty at 10:08 PM 1 comment:

When I went food shopping I stuffed the $3 into a Salvation Army bucket. See? In order to get all the advice one should, one needs both (Morning) Thunder and Lightning(36).

Until next time, please remember that fresh turkeys are on sale for 49 cents a pound.

Ah, my devoted readers. I feel like I've been ignoring both of you. Sorry, but really, there's been nothing to write about. But something has happened, and I would like your advice.

We have a pizza joint maybe 1/2 mile from the house. It isn't, you know, good, but it's there and it sells chicken wings and soda by the 2-liter bottle. So I'm a relatively frequent visitor and the new owner and I have had maybe a half-dozen conversations in the last couple of months.

Anyway, this morning I was heading to make my post office/Dunkies/grocery store circuit around our sleepy little burgh when I discovered that my battery was completely dead. So much for my errands, but also so much for my damned lunch. When the time came I decided to get some wings from this joint and have it delivered, as it was raining, damp, and raw and I didn't feel like walking there and back with cold wings.

I call in the order and about fifteen minutes later who should be at the door but the owner himself. He greets me with obvious recognition, asks me how the Bruins were doing, etc.

But here's the thing: I didn't tip him, and I'm still wondering if I did the right thing.

Now I am a neurotic tipper. Being a Son of Abraham I am sensitive to the old rhubarb that we Jews are a cheap bunch. Yes, my mother has not actually purchased a packet of Sweet-n-Lo in 30 years. Yes, my Dad, rest his soul, believed you should tip less for breakfast as opposed to lunch, as if the morning shift was somehow manned by the independently wealthy. But I am determined to break the chain. Let no one call me cheap. Meals start at 20% and go up from there. Everybody who does something for me gets their palm crossed.

But this guy, this guy was the owner of the place. And you don't tip the owner. You just don't. Your two bucks could get speared by the longhorns on the hood of his Cadillac, for chrissake. He's different from the guy who gets paid eight bucks an hour and fills his own gas tank and for whom a trey in his hand that he doesn't have to pay taxes on actually matters. It gets him 20 miles further down the road - it means something.

And yet, still I agonize over my omission. Should I have tipped the guy anyway? Would he have been insulted? Was he insulted because I didn't tip him? I would like your opinions.

In other news, I split at the Mookie this evening. I led most of the evening. When it was down to three of us I offered a split. One of the three respectfully declined, saying she'd rather get 3rd place than split, and that's just what happened. So when she bowed out I renewed my offer to split which was accepted - except that since he was the one who got 3rd place's chips, he was the chip leader. So technically this was a place as opposed to a win, but it was $50 in my pocket and that's cool.

Until next time, please remember that if you liked this post, a gratuity is not out of place.
Posted by crafty at 1:41 AM 5 comments:

...Toss a buck to the old guy with a military cap on today and buy a poppy, ok? There's never been a bigger debt that can be paid off so cheaply.
Posted by crafty at 4:58 PM No comments: