It's once again the most wonderful time of the year 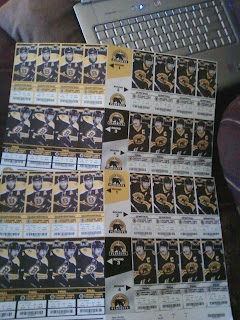 God help me, I love it when the playoff tickets arrive. In my youth a ticket to a Bruins playoff game was just about impossible to get. If you were reasonably persistent you could get tix to the first two games of round 1 - usually, back then, it was against the Whalers - but after that there was just no way you could get through. Get through? What do you mean? That's right, tickets were available by phone...what a concept!

I promised myself that as soon as I was able to afford it I would get season tickets to the Bruins. It was a promise I forgot until 2005, when the NHL locked its players out. When the news reports started coming out that the lockout was nearing an end I placed a phone call.

Funny enough, there were plenty of good seats available.

I asked for something in the low balcony, near the center. She said, "if you want close to the center, in the price range right below the one you're looking at, I can get you 2 right on the red line in the first row of this price range."

And that was it. Since then I haven't needed to worry about playoff seats or scalpers or anything. Well, anything except an epic collapse in round 2 of the playoffs. Yeesh.

Well, until next time, please remember that if you're looking for playoff tickets, I got 'em, and you don't.
Posted by crafty at 2:29 PM