So day 2 of the great Double or Nothing experiment continues with nothing but smiles and sunshine for all parties. It truly is just a game of patience and ABC poker; I know it's only day 2 but this does seem ridiculously easy.

Only a little drama today. As BB I flopped an open-ended straight draw. The villain min-bet and I called, even though I didn't have the odds. I turned a Queen which made my straight and bet it hard - I think it was 1.5x pot, kind of a monster bet all things considered. I was pretty sure I had the hand at that point. But the river gave the board a third diamond and the villain bet out 240, which was maybe 40% of the pot. And this is one big difference between DoN poker and a more conventional tourney. Normally I would have raised at this point the 755 chips I had after the call. Maybe I smelled something fishy, maybe I had already adjusted my game to a DoN environment, but I just called. The villain turned over A8d and caught his flush, and I was down to 755 in chips.

A few hands later I was in good position and got a good blind-stealing hand - Ad8c, almost the same hand that crushed me a few minutes previously. I got a call, which didn't make me happy but wasn't the worst thing in the world. The flop brought me two diamonds, one of which was the King. Check check. The turn brought me a third diamond. I shoved, trying to get the villain to fold. He snap-called with a King. Thankfully the poker gods evened things out for me and I caught my flush. Lucky? Sure, but it was bad luck that brought me to that point. The gods owed me one, I guess, and they paid up for a change.

Anyway that brought me back up to my original stack size and I was able to ride things out until a couple of the guys took their dicks out and tried to convince everybody that they knew how to play. Why on earth, in this format, would anyone play aggressive poker? I've been playing DoN for less than 48 hours and I've figured out at least that much. But these two frat boys in seats 2 and 3 kept pounding each other and between that and the collateral damage it inflicted, we got down to five people and that, as they say, was that.

I really think I'm on to something here. The only bad thing about it is that it's kind of boring. But all I need to do is picture myself at this machine that you put $20 into and 45 minutes later it gives you $40, and I get over the boredom in a fast hurry.

On the non-poker front, I redeemed some credit card points and got a digital 8-track recording studio, which makes a frustrated musician like me all squidgy below decks. Check out this bad Larry: 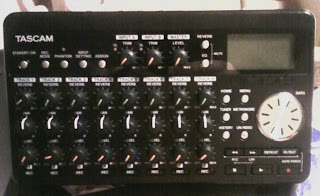 Now all I need is some talent and something to record.