Well, I got my scanner working again, except there's all kinds of gross shit in between the glass on the top of the scanner and the scanner itself - so it looks like the pictures have been used to do lines on top of.  So, sorry about that, but no lines were done on photographs, trust me.

So this one is a good indicator of me as fat boy Gary. This was taken maybe 1995 or so, outside the Boston Garden - it was really cold and REALLY windy.  Plus I was fat: 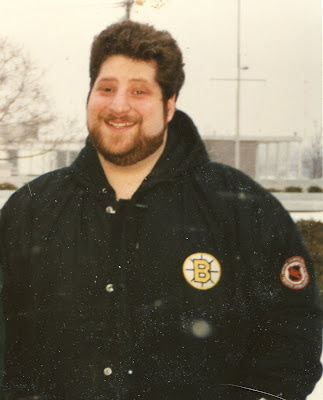 This one here was taken Thanksgiving 1998. I had lost perhaps sixty pounds at this point. My parents and my brother came to Cleveland to celebrate and eat a lot of turkey.  As always, my brother gave my Dad rabbit ears:


This one I like to call "Lefty Elvis."  I don't know exactly when it was taken, but I got that guitar in my hand Christmas 1997, so it had to be after that: 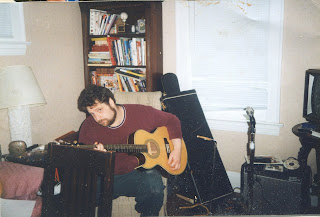 And, ladies and gentlemen, the jewel of the album, the most super-secret photo ever:  Actual physical proof that Tootsie exists.  This was taken at our friends Connie and Chuckie's wedding in Akron, OH.  We won the prize for the furthest away someone came to the wedding, at 530 miles.  And because it's a super-secret photo, it's black-and-white: 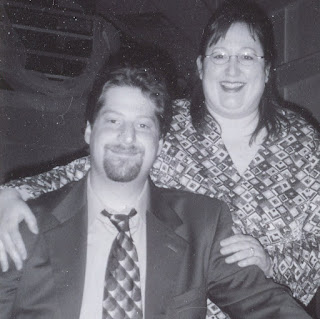 I like this shot; it really gives the impression that Tootsie likes me. And that's important.

So that's the trip through the Crafty Southpaw's photo album.  More to come in the future, unless I can't get my scanner cleaned up; all that schmutz is really distracting.
Posted by crafty at 9:08 PM