So for some reason a few days ago I had a yen to play poker online.  I didn't want to play poker for Monopoly money, though; that's not real poker as we all know well. I remembered that Bodog still allowed Americans access to their account so I opened it up and lo and behold I had about $132 in there. Score! So I settle in to a .50/1 NL ring game, put $130 of my stake in front of me and happily start playing.

And I was doing well, which frankly didn't surprise me; low-stakes NL cash games are daddy's bread and butter. I had built my stack up to over $200 in 45 minutes and was cruising.

As an aside, I've noticed one difference between live and on-line cash games that makes things more difficult for me. Online, people tend to come and go with much greater frequency than in person.  So every time someone stands up you lose any information or observations you've made. What's worse is that every new guy who sits down is a liability to you, because you tend to play tighter against someone you've never played before, especially the first few dozen hands. On the plus side, if they haven't bathed in some time, it doesn't bother you as much (at Foxwoods one day the same incredibly water-shy old geezer nauseated both Josie and me at different points in a tournament).

So anyway, like I said I'm feeling good, making good decisions, playing smart (tip o' the pen to what's-her-name) and generally cruising, when I look down and find two black aces in the cutoff seat. I make a standard raise, Dealer (who is big stack) re-raises, everyone else folds to me.  I three-bet heavy, he shoves. I didn't relish playing a hand for $200, even if I'm the nut favorite, but I call anyway, obviously, and he turns over queens. I knew right then and there that I was dead.  It's just a feeling I get sometimes; I think it comes from playing 100,000 hands with Josie and getting best hand cracked time after time after god damned time.  It's a sort of piss-shiver, pit of the stomach, frozen skeletal hand squeezing your balls sort of feeling - I don't recommend it.  Anyway, I knew right then I was dead, and sure enough, a queen right in the door sealed my fate. 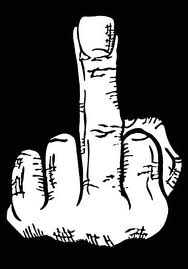 A subtle message, but heartfelt
I now have $1.59 in my account, and if there is one thing you can count on, it's that I'm not putting another penny in there, even if I could.  So here's what I'm going to do: I'm on a mission to extend my bankroll to $100, a buck at a time.  I'm going to do $1 heads-up tourneys until I get my bankroll back up to $20 or so, then start in with $2 tourneys, etc. etc. I'll report my results as often as I can remember to do so.
Posted by crafty at 10:28 PM