McRib is Back - Ulcers All Over America Rejoice 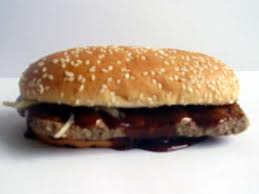 Mmmm?
It's important that you know this about me: I have no problem whatsoever with fast food.  Sure, there are joints I like better than others, but generally speaking, the combination of inferior beef, two slices of orange cheese and a pile of salt has always been a go-to choice in the Crafty Southpaw's cuisiney lexicon.  A cheeseburger on a sesame seed bun - hold the onion and the pickle, please - goes down nice and easy. Yes, it's a relatively unhealthy choice, but who gives a fuck? My family's genes virtually guarantee a short life for me, and I'm as cool with that as I can be.  At 43 I'm more than 10 years past what my family calls middle age.  I didn't have a grandparent who lived past 76. My Dad came within a hair's breadth of dying at 68, and only made it to 75 thanks to large doses of the best that the American medical system has to offer and, it must be said, a slight dose of hypochondriasis that shuttled him to the hospital four times a year.

In short, life is short, so enjoy your time under the golden arches.  That's what I do.

Which brings us to the object of this post: the McRib.  An unassuming sandwich, the McRib is a hunk of pork pressed into the shape of a section of a slab of ribs - boneless, of course - slathered in barbeque sauce and sprinkled with slivered onions. They trot it out every half-dozen years or so and foist it on an unsuspecting public, putting it back in the vault a few months later.  The reason they do this is that they are taking advantage of the incredibly short memory of the American people.

Because, you see, the McRib is fucking nasty. But it sounds like it might be good.  So they release it, put McRib commercials in heavy rotation, and wait for everybody to order one. And when they do, they'll take four bites and throw it away with a look on their face that suggests they smelled something bad - which of course they did.

So I'll spare you the disappointment and the waste of four bucks: don't eat one.  They're nasty.  Order yourself a quarter pounder with cheese, or maybe, god help us all, a filet-o-fish. But stay away from the McRib.  It's pressed and formed and disgusting. And just to make sure, I'll be ordering one tomorrow. I'm pretty sure I'm not going to like it. But if it leaves a bad taste in my mouth I'll wash it out with a tall cool glass of McChicken.
Posted by crafty at 2:19 AM