Wherein I Expose My Vagina

Any of you remember that scene in The Sopranos when they're all at Uncle Junior's party to celebrate his hung jury, and he stands up to sing Core 'Ngrato ("Ungrateful Heart") and all the old Moustache Petes start to cry? 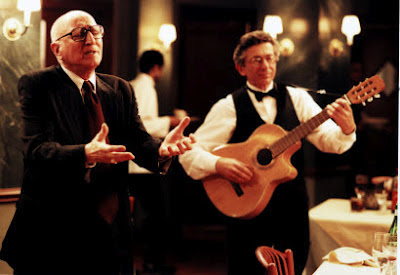 I almost hate to admit it, but that's me.  Maybe it's because I've been a musician for more years than I count (not a good one, mind, but I've certainly put the time in), but music does indeed move me more than most.  And a song of subtlety, of great beauty, of message, can easily move me to tears, and stay with me for a long, long time.

I'm going to cite three examples here, and the odd thing is that two of them are re-workings of other people's work. I say it's odd because I have a decided prejudice against people who make their lives as performers of other people's art. Singing another's song doesn't necessarily make you an artist, unless you really step up to the plate with a re-imagining or just blow me away with talent and subtlety. But - there it is, two out of three, who knew?

Anyway, as I tell you which songs they are, I'm going to ask that you give them a listen, especially if you've never heard them before. I can't expect a similar emotional response, or even any emotional response whatsoever, but at very least you'll know what triggers one in me.

The three songs, in no particular order, are these:

First up is Eva Cassidy's Fields of Gold. This is a complete rework of a limpwristed throwaway tune by Sting. Cassidy, her life tragically cut down by cancer before she became famous, imparted the song with the emotional weight it deserves - the lyrics describing a couple growing old and looking back on their lives - and gives the song a feel that is 180 degrees different from Sting's.  Stories abound all over the Internet of people bursting into tears the first time they've heard it: in fact  I played it once for a coworker in my office, and when I looked up from some busywork I was doing I saw she was weeping.  Not just tears, but actually weeping, at the power of her performance.

The second song is Jeff Buckley's version of Leonard Cohen's Hallelujah. This one gets me just from the sheer beauty of the song.  It holds no particular deep message but it's just goddamned brilliant. A perfect execution of a song pretty damned good to begin with. Of the three songs here, this is the one that you'l likely know.

Finally the last song on the list, yet not nearly last in any other way, is the Pogues' Fairytale of New York. I'm not sure any words I have are fit here, so I'll just clam up and ask that you give it a listen:

Hope you like these songs.  Let me know what you think of them.