The Nearest Pile of the Crafty Southpaw's DNA

I'm not entirely sure why, but I've never really talked much about my brother Ross, older than me by about 18 months, the member of my family to whom I am the closest, and one of my very best friends. 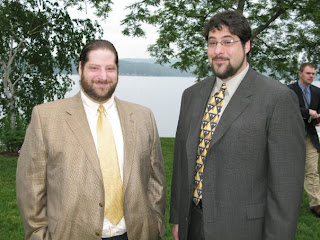 Me on the left, he on the right
This picture was taken at our cousin's wedding, which as (mis)fortune would have it took place on Father's Day 2008, some 35 days after our Dad passed away. That's perhaps why, despite the joyous occasion, the smiles were a bit thinner than they otherwise would be.

I'll flatter myself that I'm a pretty smart dude - as I mentioned many moons ago I applied for, and gained, membership to MENSA just to prove to someone that I could - but Rossy is an honest-to-Buddha genius. He retains just about anything that he's ever exposed to, and many is the time that I've called him for all matter of intellectual minutiae, from song authors to a cogent discussion of intellectual exercises like The Prisoner's Dilemma - and he's had the answers immediately at hand.

How smart is he?  He got a combined 1480 on his SAT's. His academic achievement speaks for itself - skipped first grade; won admission to a local Jesuit Preparatory High School and earned an academic scholarship (where he won a varsity letter for fencing, on which team he was a distinguished member), and, despite regretting the decision later in life, eschewed a free ride scholarship, tuition room board and books, to any state collage he chose, to instead enroll at and graduate from Dartmouth College.

If our parents ever failed us in any meaningful way, it might have been their unfortunate habit of pigeonholing my brothers and me and defining us in one word - thus Ross was "the smart one," despite having a good sense of humor, and I was "the personable one," despite the fact that I was smarter than the average bear. In fact it was only when I sat down with my parents to do some retirement planning some two years before my Dad died that they admitted, wonderingly and a bit grudgingly, that I had some game.

Despite it all, though, and notwithstanding the odd time or two I smilingly motherfucked him for being so goddamn smart, I was never jealous of his gifts, and there was never a moment of animus between us. The one time I remember getting into a verbal fight with him we both blurted out clumsy apologies to each other the moment we saw each other afterwards.

We spent hours playing together as kids, whereas our oldest brother Eric preferred his own company or the company of his friends. In many ways, especially when we're together, we act like twins do, finishing each other's thoughts and saying the same thing at the same time.

It's a private theory of mine that all geniuses are broken - that the cost to pay for tipping the scales so deeply towards smart is a certain emotional detachment - and I don't think Ross would disagree with the fact that this exists to an extent with him. I am 43 (or will be this coming Monday), and he is 44, and in our long time together we have hugged each other exactly once - at the old man's funeral. I find, despite the fact that we shared this epic sorrow (he was as close to Dad as I was; we both just loved him with all our hearts), that I can't lean on him for emotional support when Dad's ghost looms large and all is sadness. Not because he's deliberately unsympathetic; he truly doesn't understand how after a certain amount of time I can't just move on, like he did.  No malice there, but no understanding either. That's just Rossy - I'd no sooner begrudge that than I'd begrudge his being right-handed.  He's my brother, my confidant, the one person in my life who would stick with me to the very end, and no words could aptly describe how much he means to me.

I meant for this discussion of Ross to serve as a simple introduction because I wanted to repost a hysterically funny story he wrote about his house taking a shit on him, but I guess my fingers ran away with themselves.  I guess I felt it important.  If one of the purposes of this blog is to give you a little insight into my life, I suppose you need to know about Ross - he's that important.

The rest of the plumbing in the house must have been watching me during the last episode and got the idea that I was responsible for the murder of the drainpipe and toilet flange. It took revenge on me the only way it knew how. In an incredible and disgustingly literal way last Saturday afternoon, my house took a giant shit on me.

Let's back up a bit before we get to that part: after my last post I did some poking around, and a bunch of signs (and a comment by Da Snoop) pointed to a clog between the main standpipe and the city sewer connection as the root cause of my plumbing woes. A local plumber concurred, and suggested the City of North Adams' Water and Sewer Department keeps a cape and set of tights in the back room to swoop in and save the day in cases like this. Eager to fulfill that mental picture, I called downtown and explained the problem. Shortly therafter, three guys from the city came out to snake my sewer connection. None of them were wearing tights.

We traipsed around the cellar looking for the main sewer pipe cleanout, which we never found. Our guess: it's buried somewhere within 3 feet of the foundation wall, 12 to 16 inches under the southwest corner of the basement. None of the branch lines will work to get them in. There's nothing they can do. They left the house, tried snaking out the sewer pipe from the manhole to the property line, and told me to call them back when I find someplace they can stick their auger into.

I had a few ideas, believe me. But now I was back to square one. At a loss, I cast my eye on the crappy old washing machine that was in the basement when we bought the place, but have never and wouldn't ever use.

In a good swift kick to the nuts of the plumbing code, the previous owner had put the drain hose from the washer straight into a 1.25" inch hole drilled into the side of a 4" vertical cast iron pipe. It was an illegally vented drainpipe branch, poking straight outside somewhere underneath our porch. Wonderful. But a light went on in my head: I would simply take the drain hose out of the standpipe, get my auger in through the hole, and snake out the damn thing myself.

Brimming with unfounded confidence, I secured a 50' auger and some pipe repair materials, stood steadfast by the old crappy washer, and pulled the drain hose out of the hole. It dripped some foul stenchy water, then began oozing out a plug of nauseating semi-solid grayish-brown slime. Imagine a turtle, poking its head out of its shell--only instead of a face coming out, it's actually a glop of the vilest substance known to mankind.

I did what I had to do and used the auger to get in the hole. I felt something give. And then it came.

Out of this three-centimeter hole came an explosion of waste material the likes I hope to never see again. For about 15 full seconds, my house bent over and shot projectile diarrhea an arm's length from my face, in an eight foot long stream, from the depths of its bowels onto my basement floor. About 10 seconds in, I was worried it would never end. I was trying to figure out how I was going to explain a house full to the rafters with poo to an insurance adjuster.

Fortunately, it slowed, and eventually stopped. I stood stunned in a quagmire of confusion and raw sewage. My own house had taken a giant crap on me. What the hell had I done to deserve THAT?

I straightened up and recovered my senses, several of which I would have liked to immediately lose again. It's not like I was covered in the stuff or anything, but the shoes I had on are getting buried in the tomato patch once the snow melts. I hope to never touch them with ungloved hand again.

I called in a hazmat team to take care of the aftermath, and Tara's probably never going to set foot in the cellar again. But it did take care of the slow drain situation. The bathtub is psyched about that, at least. Repairs and remediations are set to take place while we set up to do the final plumbing for the kitchen sink and dishwasher. It'll be just like a real house, sooner than later.

Until then, I believe my house and I have reached an uneasy truce. Let's see how it holds.
Posted by crafty at 5:44 PM