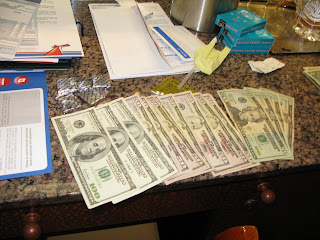 It would be unseemly to tell you how much of this was profit.

So I'm back from the cruise, Hurricane Earl having done nothing but sneezed in our general direction and moved merrily along to Greenland. Yes - a tropical hurricane is lapping not so gently at the shores of Greenland. That's how I like my irony, friends and neighbors.

Anyway, the cruise was great and I made a shitpile of money at the poker table. They spread a $1/$2 NL cash game, using Poker Pro dealer-less tables. It's a choice, I guess; the cruise line doesn't have to pay for (and house and feed) another dealer - even though they employ dozens for their casino. It's not the worst thing in the world, I reckon. I like fucking with poker chips though.

Anyway it was more or less the same dozen people who showed up at the table, 12 of the worst poker players that I personally have ever seen. People calling big bets with 9-5 offsuit; people not respecting bluffs or bets from me or anybody else for that matter; people playing poker for the very first time in their lives. I don't know, maybe it's because they're on vacation, in the bag, and flush with spending money, but Ja-heezius Christ, there was some bad play going around.

Until I got the vibe of the table and adjusted my game accordingly I was already pretty far down - like multiple hundreds. One quick example: I held a pair of sevens and flopped the set. I bet huge, trying to protect my hand, but got called nonetheless, with a flush draw. Guess what? he caught, and there was the better part of a hundred bucks down the shitter right there.

So I decided that if that was the kind of nonsense I was up against, I wasn't going to fuck around. I decided that until I got some money in front of me I was going to play tighter than a gnat's ass stretched across a rain barrel. I'm talking top 10 hands only in early or middle position, and maybe high suited connectors, A9-A10, and middle pairs in late position and if it's cheap. So that stanched the bleeding for a while until I got my wind back and my legs back underneath me.

The first whiff of recovery came when I looked down at two black queens. 4x preflop raise, five callers. Flop all lower than Q, rainbow. Bet $25, four callers. Turn blank, I go all in with about $60, three callers. The Crafty Southpaw pulls down a hand that puts almost $400 in front of me. Woo hoo!

From that point on it was smooth sailing over calm seas, with one exception.

His name was Chi. A Chinese fella who was vying with me for Table Captain. Likeable, affable, and sitting affably on a mountain of fucking chips. He would buy a $14 pot with a $200 bet and tell you so: "I want that $14. I have nothing but you can't call me!" and cackle a high-pitched laugh that, really, made one want to stick a fork in his throat and pour rat poison in the wound.

So fast forward to Saturday: I'm up huge, have maybe $500 in front of me, and I look down from my lofty perch as SB to see AJ. Flop comes JXX, two hearts. I bet, Chi raises to $25, I raise to $50, he calls. Turn comes a third heart. He goes in the tank for a little while, adopts a thousand-yard stare, and puts me all in. I think perfunctorily for a while and fold. I figure he either has the hearts or the Ace of hearts - either way I'm not going to risk $500 with TPTK. He turns over an absolute bluff; he was actually drawing dead, but whatareyagonnado. I kept my cool until I get back to the cabin and unleash a torrent of obscenity that would have made Popeye drop his pipe. I lost a hundred bucks but even worse could have won $500 more.

So yesterday, I'm pleased to say that the pattern repeated itself: After only a half-hour or so I was up $100 and doing well. Maybe that's why as SB I called the BB with A6o - it was only a buck, and I had plenty of those.

The turn is also a blank: I don't think there was a card over 8 on the board.

Chi gets that faraway look in his eyes and moves in. He only has about $80 left in front of him. And I start thinking.

"Here's the problem," I said to him. "Last time you did this, you looked exactly like you look now. But last time, I had a hand. This time I don't, but I think my garbage beats your garbage."

He gets a look like he's been constipated for a week. The table turns over his hand.

He gots himself a whole bunch of nothing. I win with Ace high. Somewhere like $300 on this one hand.

To his credit, Chi took it really well. He laughs, he leans over to high-five me, he compliments my call. Back-pats and 'good call' from everybody. And lots of yummy money my way. A few hands later I decide to take my winnings and go home.

The last two days erased my deficit and put me way ahead - I won't say how much but it reimbursed the cost of the cruise to the tune of about 25%.

And more importantly, it reinforced a very important bit of philosophy: if you honestly think that your opponent is bluffing, then move in. If you're wrong, that's fine; well, it's not, really, but it's another problem for you to work on. But don't let a big bet on its surface cow you into folding.

In any event, it was a great week of cruising, caloric overindulgence, watching attractive 20 year olds in bikinis, and poker, but I'm home now.