**SPOILER** Firearm Content.  Someone, to whose blog I will not link here, does not like when I blog about firearms.  I won't mention this person's name; don't want to embarrass him or her, but I said to this person, "Josie, I'm not gonna stop writing about them..."

It required a selection process that encompassed months of research, discussion, advice, Internet hoo-haa, forums by wacko 2nd-Amendment types, and comments by my readers. However, after said herculean effort, Team Southpaw has at last made a decision on the firearm that both Tootsie and I are comfortable with as a primary means of defending Shangri-La (also known as The Jakewood). It has been purchased, inspected, approved, and is currently waiting out its purgatorial term of 8 days, the waiting period here in Rhode Island, at my local gun shop.

Before I tell you what I have decided on, allow me to articulate the needs that this particular firearm needed to fulfill.

The winner of this RFP, as it were, needed to be:

1. Above all else, capable of stopping an intruder to the house with one shot.  I interpreted this need to actually be a conglomerate of several sub-needs:

2. As ambidextrous as is practical, as Tootsie is a righty and I am, well, a southpaw
3. Reasonably priced
4. Chambered for an inexpensive round (a 3-dollar razor that needs 5-dollar blades is no bargain)
5. Recommended by those who've purchased one
6. Easy to break down, clean, and reassemble
7. (if it fulfills items 1-6) A weapon of some historical significance, because a lot of my interest in firearms is based on the stories one can tell

As time passed and I started focusing my research, I made two preliminary recommendations to Tootsie and sent her some data and a few YouTube videos. To my great satisfaction, and some small surprise, she came back with some thoughtful and intelligent questions, asked for some further data to determine the differences between the two semi-finalists, and really took an interest in the process. Ultimately, she came to the same conclusion that I did; the best gun for the job is...

...The CZ-82, the Czech equivalent of the Soviet Makarov pistol. 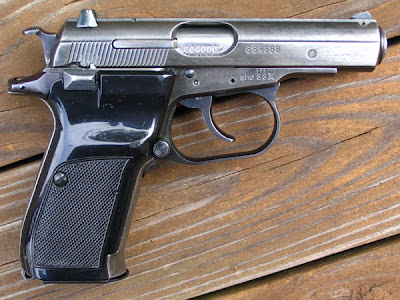 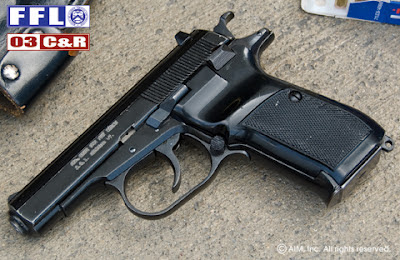 Ain't she a beauty? Here's a little history.  If you're this far in, you're probably going to be interested, but if not, just skip ahead a bit.

The Soviet Union (the "Russkies") were, at the end of World War II, still arming its officers and non-combat enlisted men with the Nagant M1895 revolver and a clumsy simplification of the Colt 1911 called the Tokarev TT-33. The revolver was a nice enough piece but practically useless as a weapon.  It was inaccurate, used ammunition that was expensive to manufacture, and had a trigger pull that, at 11 pounds, was just one lead pipe bitch-and-a-half to fire. And they never saw the TT-33 as anything but a stopgap (though ironically the weapon is still in use in several countries).

They knew they had to make a change, but instead of first designing the weapon, they developed a round they wanted to use and built the gun around it.  The round they decided upon was a 9mm x 18mm round with a pretty good powder load.
The winning design was submitted by Nikolay Fyodorovich Makarov, and has become the country's standard sidearm for over sixty years, from 1951 all the way to and through the fall of the Soviet Union; in fact it is still in use by the new Russian Federation to this day.

Eventually, around 1980 or so, the Soviets determined that all of the Warsaw Pact countries would develop firearms around the 9x18 round, now named the 9mm Makarov round. The Bulgarians, Poles and East Germans developed what were essentially clones of the Russian Makarov.  But the Czechs, long known as expert machinists and gun manufacturers, developed a weapon that outclassed the Mak and all its clones, with a completely different set of guts, and they named it the CZ-82, based, like so many firearms, on the year of its release.

The CZ-82 was the class of the 9mm Makarov guns; it was easier to field-strip, offered ambidextrous magazine releases and safeties; and featured a barrel that, instead of having rifling etched into it (the spiral that makes the bullet spin as it fires), was polygonal on the outside, then twisted, so that the spin was imparted by the barrel itself.  This made for a completely smooth barrel which meant that it was incredibly easy to clean and to keep clean.

Another difference between the CZ-82 and the Makarov is that the 82 could accommodate a double-stacked magazine, so it can hold 13 rounds instead of the Mak's 8.

For some reason the US Government put the 82 on its Curio and Relic list, making it easier to import into the US.  And, like so much else coming in from the former Eastern bloc, they're dirt cheap.  The first huge batch they brought in sold out right away, and those who didn't act were made to wait.  But eventually they sent another gigantic batch to the US, and at this point anyone who wants one can certainly have one.

The one they sent me was manufactured in 1990 and yes, I know it was refinished before it was exported to the US, but it doesn't look like this thing was ever shot. The finish is near-perfect (gun people use percentages; mine was estimated as a 90%), there isn't a drop of wear on any of the insides, and the barrel literally shines when held up to the light. It's as perfect a specimen as a 22-year-old piece of machinery could ever be. The trigger pull is beautiful - soft without being mushy - in either single- or double-action (in other words, pulling the hammer back and shooting or letting the trigger do both jobs).

And I paid the princely sum of $229 for it, which is less expensive than any but the absolute shittiest of available firearms today (can anyone say Hi-Point?). It came with an extra magazine, a cleaning rod, and a holster that, unlike just about any other holster on the planet, was ambidextrous.  Bet you didn't even know holsters had hand-bias, did you?  Well they do. Think about it: You put a holster on your left hip and the gun sits backwards in it.

Ammo for it is dirty-dirt-dirt cheap: I bought a box of 50 for 11 bucks.  Compare that with the $40 I "shelled" out for the 50 round box for my Nagant revolver! That shit pays for itself pretty much right away.  Josie, if you're still reading this, I'll give you a dollar - don't nobody tell her or I'll be pissed.  The inexpensive ammo makes it easy to practice with it, which is important for Tootsie, who needs to make herself more familiar with this, as she needs to use it as well, in case some shit goes down when I'm not around.

Just as important as anything else, nobody who owns one and gave an opinion on it had a single harsh word to say.  Praise for the gun was universal.

Anyway, there you go.  A quick shout-out to Duggle Bogey, whose glowing review of his Makarov led me down the road to the CZ-82.  Thanks, brother Duggle!
Posted by crafty at 11:52 PM