Hello again, friends.  It seems like a lifetime since I've been in front of the computer, but to the trees and the grass but three days have passed by.

It is exactly 11:12 PM as I write this: our house has been without power since 10:30 AM Sunday. That's 60-plus hours if you're scoring at home, or even if you're by yourself.  Tootsie and I have officially cried "Hold! Enough!" without fear of being damned by MacBeth, and have hied ourselves to a Comfort Inn in Seekonk, Massachusetts, with the twin attractions of a hot water shower and air conditioning, as well as electric power, so we don't have to retire with the sun like farmers of yore. Tootsie is watching Chelsea Lately on the last tube TV to exist in the civilized world and in addition to (hopefully) entertaining you with my overbloated prose I'm sitting in my skivvies, a towel around my neck, relishing the wonderful feeling of being clean, not having cleaned any part of me with anything but ice-cold water since Saturday. Let me tell you - and I'll warn you in advance this is likely an overshare - but I could have cleaned myself this afternoon with the flat end of a butterknife and made progress.

Today I did my best to give myself a halfway-decent whore's bath - what a friend of mine calls "a cat's lick and a promise" - and went down to Foxwoods to see if I could duplicate the success I enjoyed on Saturday at the $1-$2NL tables. I'm pleased - maybe even a little giddy - to announce that today went exactly like Saturday did: I turned $200 into almost $600 by playing just a little smart: by that I mean ABC poker with a few adjustments here and there.  For example I busted out a dude who loved Ace-rag, and when he put in a big bet pre-flop and I had AK I knew I was up against no pair and that I had him crushed.  Sure enough, it all fell into place just like I thought.

In one notable hand I made a very smart post-flop check when my pocket pair connected, which is against my nature, and Doyle's teachings, but I knew the crushing mediocrities in seats 2 and 3 (seat 8 for me today) would bite on top pair (there was an Ace on the board) and I got one guy for $40 and the other guy for everything - just by checking that flop.  Yummy chips.

Speaking of yummy, whoever tipped Josie off to the existence of the most ethereal milshakes in existence, and who thence tipped me off, deserves, er, a tip. I had a strawberry shake with whipped cream and was, well, yummy.

I've spoken to Tootsie about this and I'm going back.  I have an actual honest-to-buddha bankroll, a fat wad of $100's in my wallet, with nothing attached to it but the potential to create more $100's, and I'm going to give it three or four days a week to see if I can make actual pay-the-bills money. It's not because I've had two positive sessions in a row - it's that luck doesn't figure into it. I find myself outplaying my opponents, and they just give me chips-a-plenty. I might have finally found my niche at $1-$2NL.  La vie, c'est bon. 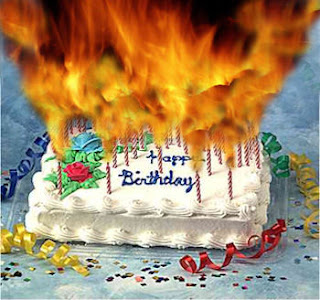 She hates the big happy birthday thing, when the idiot flair waitrons come up to the table clapping and singing a public domain ditty about how FUN it is that you're one year closer to the grave.  I stopped making that mistake a long time ago and I do NOT want any shenanigans taking place tableside.  Well, today I told her that I would share a dessert with her (I'm a compulsive anti-sharer), but only because it was her birthday.  Our waitress, whose tooth count had an over-under of 16, and I'll take the under, overheard this and brought the whole hand-clapping song-singing band of idjits to the table and as they started in, I first made the throat-slash gesture, universal for "knock it off," which didn't seem to work in this end of southeast Mass, and I had to actually raise myself out of my chair, and with a voice louder than seven singing saps, said "STOP!" in a voice that conveyed just exactly how serious I was.  They slunk away like they were caught looking in someone's medicine cabinet.

Toots would like it known that she thought I was a big ol' meanie.  I'll take that.  You want to know how mean she is?  A few minutes ago she said "What's that smell?  Oh yeah, it's YOU, clean."