Thank you, Noodles and Ass-Chin 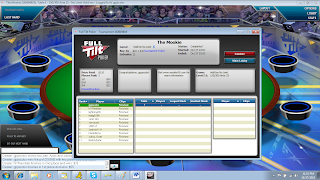 Really, it was more or less ABC poker until it came down to 3-handed. NYRambler had 21,800, I had 8,500, and Lightning had 2,300. Around five hands in, lightning pushes with J7s on the button. I'm holding A9o. I think about it for a while, then call. The ace on the turn assured my victory.

So now it's heads up between NYR, who has just over 20 large, against me who has a spooge over 11K.

The whole heads-up dealio was four hands. The two big ones were both over 10,000 pots.

On the first one I was holding A5o, and the flop generously gave me two pair. Regarding NYRamber, I kind of figured him out so I was confident about how to bet for maximum value. By the time I three-bet the turn all in,and he folded, he had over 5,000 chips in the middle. That was yummy.

The yummiest hand though was the last one - isn't it always? - when I found AJh out of position. NYR as dealer raised to 900 (std raise). I re-raised to 2400, NYR shoved and I called like a shot. My AJ was great against his - wait for it - K3o. Not only did my ace hold up but it improved on turn and riv with an A J for two pair to win it.

So that was it, a pretty standard end-game. So: who are Noodles and Ass-chin, and why do they deserve the thanks? Because...they cancelled on our home game and there weren't enough to continue, so I stayed home and Mookie'd up for the first time in a while.

So now I have a win and a place. I think that makes the Mook profitable for me. I dunno, I'll have to think about that.


PS Speaking of home games, make sure if you haven't already to read part one of a short story I'm writing. The first three installments are already written, so hopefully this will push me to finish it.
Posted by crafty at 12:14 AM